Welcome to the free weekly edition of Popular Information — written by me, Judd Legum.

You can support independent journalism that holds the powerful accountable — and get Popular Information four times per week — with a paid subscription. It's just $50 for an entire year.

Since Popular Information launched last year, it has consistently demonstrated the ability to break through the noise and create change. Even more is possible with your support.

The National Enquirer calls itself a tabloid. But, by its own admission, it has operated as a part of Donald Trump's political organization. The company has used its financial resources and prime exposure at supermarkets and drug stores across the country to protect Trump, and attack his enemies.

In a non-prosecution agreement signed on September 20, 2018, AMI, the parent company of the National Enquirer, admitted to conspiring with Trump to suppress negative stories about him.

In or about August 2015, David Pecker, the Chairman and Chief Executive Officer of AMI, met with Michael Cohen, an attorney for a presidential candidate, and at least one other member of the campaign. At the meeting, Pecker offered to help deal with negative stories about that presidential candidate's relationships with women by, among other things, assisting the campaign in identifying such stories so they could be purchased and their publication avoided. Pecker agreed to keep Cohen apprised of any such negative stories.

NBC reported that the "other member of the campaign" was Trump himself. AMI subsequently paid $150,000 to Karen McDougal, a woman who claimed to have an affair with Trump, and then buried the story.

Why would the National Enquirer go to such lengths to protect Trump? "The guy’s a personal friend of mine," AMI CEO David Pecker told the New Yorker.

AMI and Pecker, while securing an immunity agreement in exchange for testimony, admitted that this payment was against the law. The company acknowledged that it was "subject to campaign finance laws" and "expenditures made by corporations, made for purposes of influencing an election and in coordination with or at the request of a candidate or campaign, are unlawful."

As AMI was secretly making payments to Trump's alleged mistresses, it was using the National Enquirer to attack Hillary Clinton relentlessly. 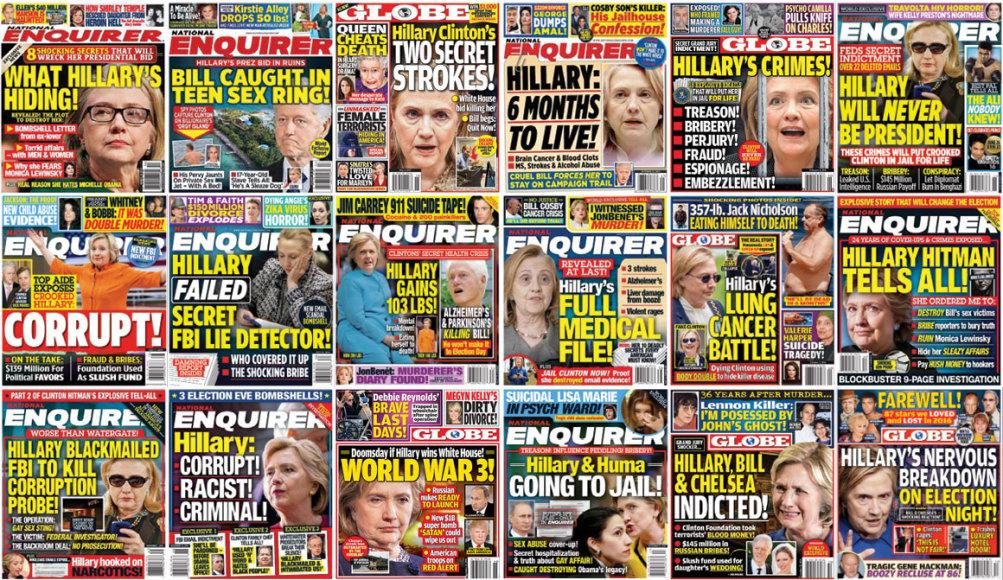 Sanchez's brother, Michael Sanchez, said in an interview that "he was told by multiple people at [AMI] that the Enquirer set out to do 'a takedown to make Trump happy.'" Bezos launched an investigation and his security consultant, Gavin de Becker, said "strong leads point to political motives."

On Thursday, Bezos published email correspondence from AMI in which the company threatens to publish embarrassing photos -- including a "below the belt selfie — otherwise colloquially known as a ‘d*ck pick.'" The only way to avoid the publication of these photos, AMI said, was for Bezos to release a statement saying he had "no knowledge or basis for suggesting that AMI’s coverage was politically motivated or influenced by political forces."

Whether or not AMI's conduct here is illegal is a matter of dispute. But for the retailers featuring the National Enquirer on their shelves, it's a straightforward question: Now that they know how AMI operates, can they ethically be in business with them?

The tactics of the National Enquirer

The email to Bezos from AMI does not appear to be an isolated incident. New Yorker journalist Ronan Farrow, who published a story on AMI paying hush money to a man who claimed to have damaging information on Trump, said he was similarly targeted.

"I and at least one other prominent journalist involved in breaking stories about the National Enquirer’s arrangement with Trump fielded similar 'stop digging or we’ll ruin you' blackmail efforts from AMI," Farrow tweeted.

At least one former National Enquirer employee thinks it's all gone too far. "It is looking less and less like yellow journalism and more like organized crime. I think there is a very strong chance that David Pecker may end up doing time," Jerry George, a top editor at the National Enquirer for decades, told CNN.

The business of the National Enquirer

Unlike most magazines, the National Enquirer is heavily dependent on sales of individual copies, not subscriptions. Seventy-five percent of sales come through single-copy sales at chain stores.

The power of the National Enquirer, of course, comes not only from copies sold but from the millions of the people exposed to the cover of the magazine in checkout aisles. AMI only has that influence because of its relationship with major retailers.

The National Enquirer is using its relationship with these retailers to provide millions in free promotion to Trump. A marketing expert told the New York Times the value of the National Enquirer's positive Trump covers alone is "$2.5 million to $3 million a month."

The paid circulation of the National Enquirer is in dispute. The company claims that it has a weekly circulation of 2.3 million. The Associated Press, citing internal documents, says circulation is 265,000 per week.

The National Enquirer is also deeply in debt. According to the documents reviewed by the Associated Press, AMI still "isn’t making enough money to cover the interest accruing on its $882 million in long-term debt." For the time being, it's being backstopped by "a New Jersey investment fund called Chatham Asset Management," which now owns 80% of the company. In 2017,"[i]ts top executive dined with Pecker and Trump at the White House."

Strapped for cash, Pecker used his relationship with Trump to forge ties with Saudi Arabia. At his 2017 dinner at the White House, Pecker brought along Kacy Grine, a French businessman who acts as an intermediary for Saudi Prince Mohammed bin Salman (MBS).

The visit served as "an unofficial seal of approval from the White House" and "signaled Mr. Pecker’s powerful status in Washington" as he was seeking financial support from the Saudis.

A few weeks after visiting the White House, Pecker and Grine met with MBS in Saudi Arabia to discuss potential business ventures.

Ahead of MBS's trip to the United States in March 2018, AMI produced a glossy magazine that was distributed nationwide. For $13.99, Americans could read 97 pages about the glory of Saudi Arabia -- which the magazine refers to as the "Magic Kingdom" -- without any mention of the crackdown on MBS's political opponents, its bloody war in Yemen, or other problematic topics. 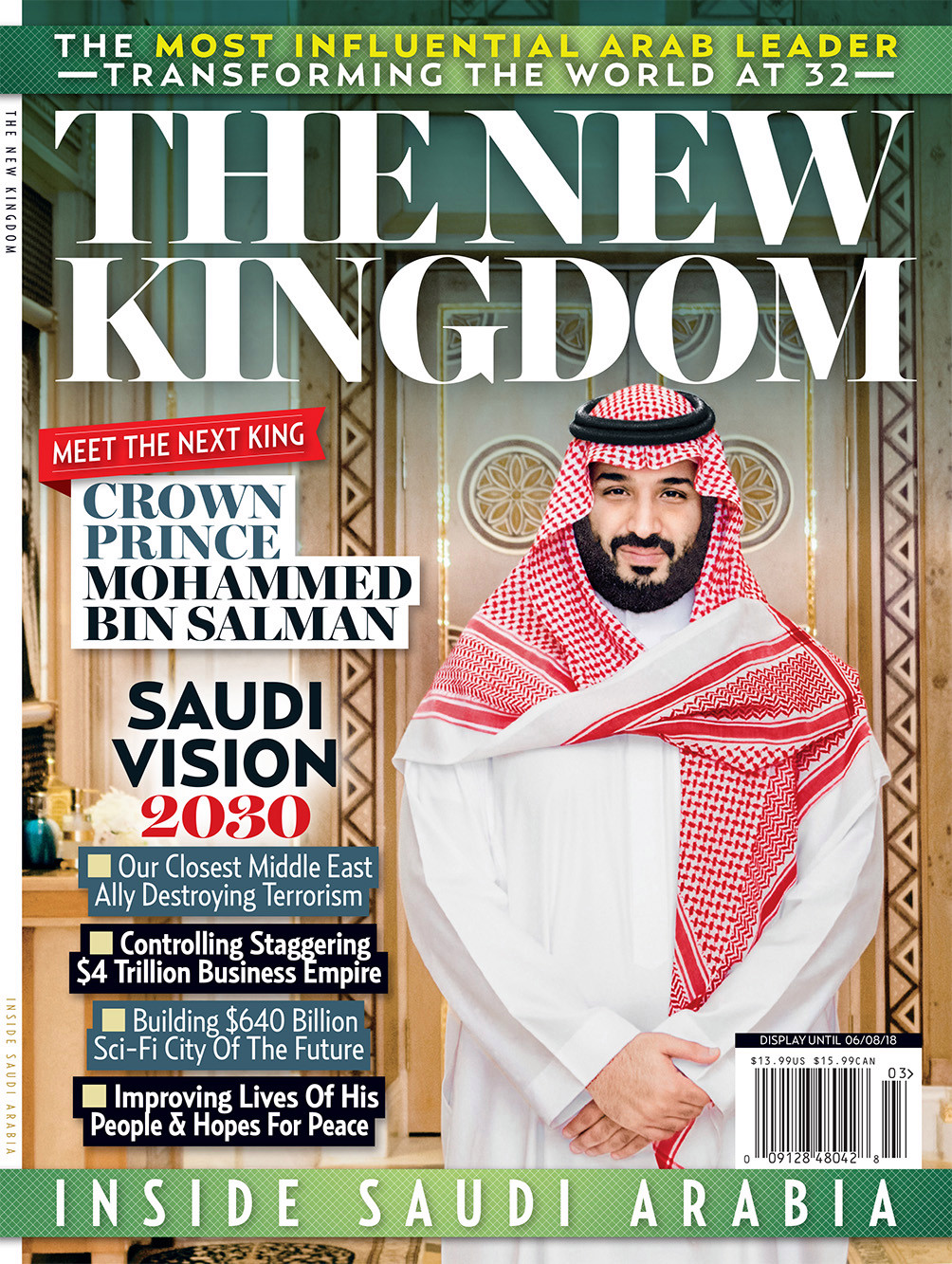 AMI denied that the Saudi government was involved in the magazine, but the Associated Press reported in April 2018 that "a digital copy of the magazine, produced by [AMI], was quietly shared with officials at the Saudi Embassy in Washington almost three weeks before its publication."

The magazine "draws heavily from newswire photos and stock images — many with no connection to Saudi Arabia." For example, scenes presented as representing life in Saudi Arabia include "sand-dune surfing in Namibia, a massive indoor greenhouse in the Netherlands and wildlife pictures taken in Zambia and Israel."

It's unclear what, if anything, AMI has received in return from Saudi Arabia. In January, however, the company "astonished most media observers by raising $460 million to refinance its debt." Before AMI raised the money, "many observers thought AMI would have a tough time refinancing because of reported problems with slumping newsstand sales for all titles."

There is one man who has drawn the ire of both Trump and Saudi Arabia: Jeff Bezos.

Trump is upset because he believes Bezos uses the Washington Post as a "political weapon." Bezos says he has no involvement in the editorial content. Vanity Fair reported on Trump's vendetta against Bezos last April:

Now, according to four sources close to the White House, Trump is discussing ways to escalate his Twitter attacks on Amazon to further damage the company. “He’s off the hook on this. It’s war,” one source told me. “He gets obsessed with something, and now he’s obsessed with Bezos,” said another source. “Trump is like, how can I fuck with him?”

According to Vanity Fair, Trump doesn't believe that Bezos isn't involved in the editorial decisions of the Washington Post because "his experience is with the David Peckers of the world."

Saudi Arabia, meanwhile, has been at odds with Bezos since MBS was "implicated in the plot to murder Washington Post columnist Jamal Khashoggi." While at the Washington Post, Khashoggi wrote columns that were critical of the Saudi government. Publisher Fred Ryan said, "The Washington Post will not rest until justice is served on those who ordered Jamal’s killing, those who carried it out, and those who continue to try to cover it up."

Pecker, through his attorney Elkan Abramowitz, denied that he or AMI did anything wrong. Abramowitz was interviewed Sunday on ABC:

Both Bezos and AMI had interests in resolving their differences. Bezos didn't want another story written about him or those pictures published. AMI did not want to have the libel against them that this was inspired by the White House, inspired by Saudi Arabia, or inspired by the Washington Post. It had nothing to do with it.

While Abramowitz ruled out Trump, Saudi Arabia, and Trump associate Roger Stone as the source of the Bezos photos, he refused to rule out Michael Sanchez. The brother of Bezos' mistress, Sanchez is an outspoken Trump supporter who knows both Stone and former Trump adviser Carter Page. Michael Sanchez denies any role in the leak.

Not everyone agrees that AMI is in the clear. The nonprosecution agreement with federal prosecutors requires AMI to commit "no crimes whatsoever" for three years. Attorney Carrie Goldberg said that "AMI threatening to expose Bezos with humiliating material — would fall under coercion laws."

"This is a completed crime. Based on the coercive nature of the threats, there wouldn’t need to be an actual distribution of the naked pictures for there to be a criminal act," Goldberg said.

Prosecutors are reportedly evaluating the revelations in Bezos' post to determine whether the agreement was violated.

Correction: This article originally listed Barnes and Noble as a major retailer of the National Enquirer. While the company does sell electronic subscriptions via its Nook e-reader, a company spokesman says it stopped selling the tabloid in its stores.

You can support independent journalism that holds the powerful accountable — and get Popular Information four times per week — with a paid subscription. It's just $50 for an entire year.

For your security, we need to re-authenticate you.