A Schlapp in the face

Since the murder of George Floyd, Verizon has been an outspoken advocate of the Black Lives Matter movement. In dozens of tweets and statements, Verizon has said that, as a company, it is not enough to express support for racial justice. The company has repeatedly said that it's committed to backing up those words with action.

"The events unfolding across the country that are rooted in hate are contradictory with our beliefs as a company and leave me with a feeling of regret and sadness. Verizon is fiercely committed to diversity and inclusion across all spectrums because it makes us and the world better...We cannot commit to a brand purpose of moving the world forward unless we are committed to helping ensure we move it forward for everyone," Verizon CEO said in a June 1 statement.

"Actions > Words.…[O]ur brand is taking a stand, pairing words with actions, and walking the walk!" Verizon tweeted on June 3.

Up To Speed @VZUpToSpeed
Actions > Words. @diegoscotti joins us to talk about how our brand is taking a stand, pairing words with actions, and walking the walk! Tune in at 12 PM ET. #FowardTogether

Schlapp dismissed Black Lives Matter protests in DC as a political stunt by people who "refuse to hold the [Democratic] elected officials in [Minnesota] to account for Floyd's murder." Schlapp said that "all lives matter," a phrase that is routinely deployed by people seeking to delegitimize the Black Lives Matter movement.

Matt Schlapp @mschlapp
Mark BLM shut down DC because they refuse to hold the dem elected officials in MN to account for Floyd's murder. It is easier to blame Trump. Keep it going and you'll reelect him. All lives matter including the dozen or so killed due to fanning these flames for political "gain"

@mschlapp Because Washington, DC is the capital of the United States and this is a national issue. And this is the latest episode of simple answers to dumb and/or disingenuous questions.

Matt Schlapp @mschlapp
Growing list of companies giving to Black Lives Matter Coalition which is hostile to families, capitalism, cops, unborn life and gender. How can a company give to a network of groups that want to outlaw corporations? Because many corporate boards are infected w leftists.

He also criticized Senator Mitt Romney (R-UT) for marching in a Black Lives Matter protest, saying Romney "marched for abortion on demand, the end of the family, no more cops and the ending of corporate profits."

Matt Schlapp @mschlapp
Poor Mitt Romney he just marched for abortion on demand, the end of the family, no more cops and the ending of corporate profits and all he got was a CNN t-shirt

In the first three months of this year, Verizon paid Schlapp $40,000 to lobby Congress on "general telcom and tax issues." On his website, Schlapp promises access "to Republican and conservative officeholders and their staff including members of the congressional leadership, key committee chairmen and new conservative voices in both houses of Congress."

But beyond the cash, Verizon's contract with Schlapp gave his views stature and legitimacy. Schlapp doesn't just disparage the Black Lives Matter movement. He does so with the imprimatur of a Fortune 500 company that pays him to advance its interests in Congress.

On June 19, Popular Information contacted Verizon and asked whether, in light of its commitment to backing its support for racial justice with action, it would continue to pay Schlapp as a lobbyist. Schlapp registered as a lobbyist for Verizon in April 2013 and has been paid by the company in every quarter since — $800,000 in total.

Schlapp, however, has not filed a termination report with the Senate, which he would have been required to do had he stopped representing the company prior to April 20. Schlapp will be required to disclose the date of his termination when the next federal lobbying filing is due in late-July. Schlapp also did not respond to a request for comment from Popular Information.

But Schlapp did appear to obliquely address Verizon's decision in a Sunday afternoon tweet.

Matt Schlapp @mschlapp
What ever happened to agreeing to disagree? Why does the American left demand that all opposing views be silenced? Why do people think they can control what a Trump supporter does or says? The silent Trump support will be off the charts in November

Verizon is one of several companies whose long relationship with Schlapp raises questions about the sincerity of their stated commitment to racial justice.

A lot of corporations are used to saying one thing and doing another. Popular Information is helping change that, one newsletter at a time. To do that, this newsletter needs to remain totally independent. That's why Popular Information has no advertising or corporate underwriting. It only exists because of readers like you.

You can support independent accountability journalism that makes an impact by becoming a paid subscriber.

Schlapp's recent comments on the Black Lives Matter movement should not come as a surprise to Verizon. In addition to being a highly-compensated corporate lobbyist and consultant, Schlapp is also the president of the American Conservative Union (ACU) and a regular commentator on Fox News and other media outlets.

As president of the ACU, Schlapp was responsible for the annual Conservative Political Action Committee (CPAC) conference. In 2017, Schlapp invited Milo Yiannopoulos to speak at CPAC, despite Yiannopoulos' association with the racist "alt-right" movement. Yiannopoulos regularly collaborated with white nationalists for pieces published on Breitbart.

(Schlapp later rescinded the invitation, not because of Yiannopoulos' racism, but because Yiannopoulos was caught defending pedophilia.)

In 2016, Schlapp had a dispute with Bakari Sellers, who is Black, on Don Lemon's CNN program. During the commercial break, Schlapp allegedly yelled, "Come at me, boy!" to Sellers — a taunt that has historically been used to denigrate Black men. Schlapp later apologized but was never invited back on Lemon's show. "I don’t have any need to be on air with someone like Matt," Sellers said.

During the confirmation hearing of Supreme Court Justice Brett Kavanaugh, Schlapp tweeted an image of "the three Democratic senators on the Judiciary Committee who are people of color." He encouraged conservative voters in swing states to "look at this photo." It was widely denounced as a "racist dog-whistle."

Abbott Labs, a large medical device company, says that the racial inequalities that exist in America are "intolerable." The murder of George Floyd, the company says, has "caused us to stop, reflect, and look at our own progress."

Racism, like any form of discrimination based on people's identities, is not just against Abbott's values, it's the antithesis of our values. The death of George Floyd - like so many similar, deplorable incidents - is intolerable, and the police officers responsible must be held accountable to the full extent of the law. But more must be done than merely seeing justice served in this and other recent cases. The issues involved here run broad and deep, and they go to the nature of our society. The protests of the last week have made that clear. We must do better to fix the racial inequalities and biases that we know exist.

These events have caused us to stop, reflect and look at our own progress...While we've been recognized for our inclusive workplace, social responsibility and community partnerships, we know we still have work to do and we will.

Abbott Labs pays Schlapp $200,000 per year to represent the company on Capitol Hill. Schlapp has represented Abbott Labs since 2018. Popular Information contacted Abbott Labs and asked whether, in light of its commitment to "do better," it would continue to pay Schlapp as a lobbyist.

"We don’t agree with Mr. Schlapp’s comments, and they don’t represent our position or values," Abbott Labs said in a statement to Popular Information. The company did not say whether it would continue its relationship with Schlapp.

"Racism, injustice and violence have no place in our society and cannot be tolerated. Yet we continue to be unable to make enough progress in this country – so at this moment it is critical to step back, face the hard subjects and try to reflect," Comcast CEO Brian Roberts said in a May 31 statement. "Honest dialogue is critical, as is fighting injustice wherever it exists. We are committed to being a champion for equality as we continue this journey together."

A week later, Roberts wrote that "[w]hile we recognize we don’t have all the answers, we agree it’s time that we start putting our words into real, sustainable action...you have my commitment that our company will try to play an integral role in driving lasting reform."

Comcast pays Schlapp $120,000 per year to represent the company on Capitol Hill. Schlapp has worked for Comcast as a lobbyist since 2015.

Popular Information contacted Comcast and asked whether, in light of its commitment to "be a champion for equality" and taking action, it would continue to pay Schlapp as a lobbyist. Comcast did not respond.

Walmart says it will "fight for greater racial equity," pays Schlapp $200,000 per year

Walmart CEO Doug McMillon says the company will "fight for greater racial equity inside and outside Walmart." 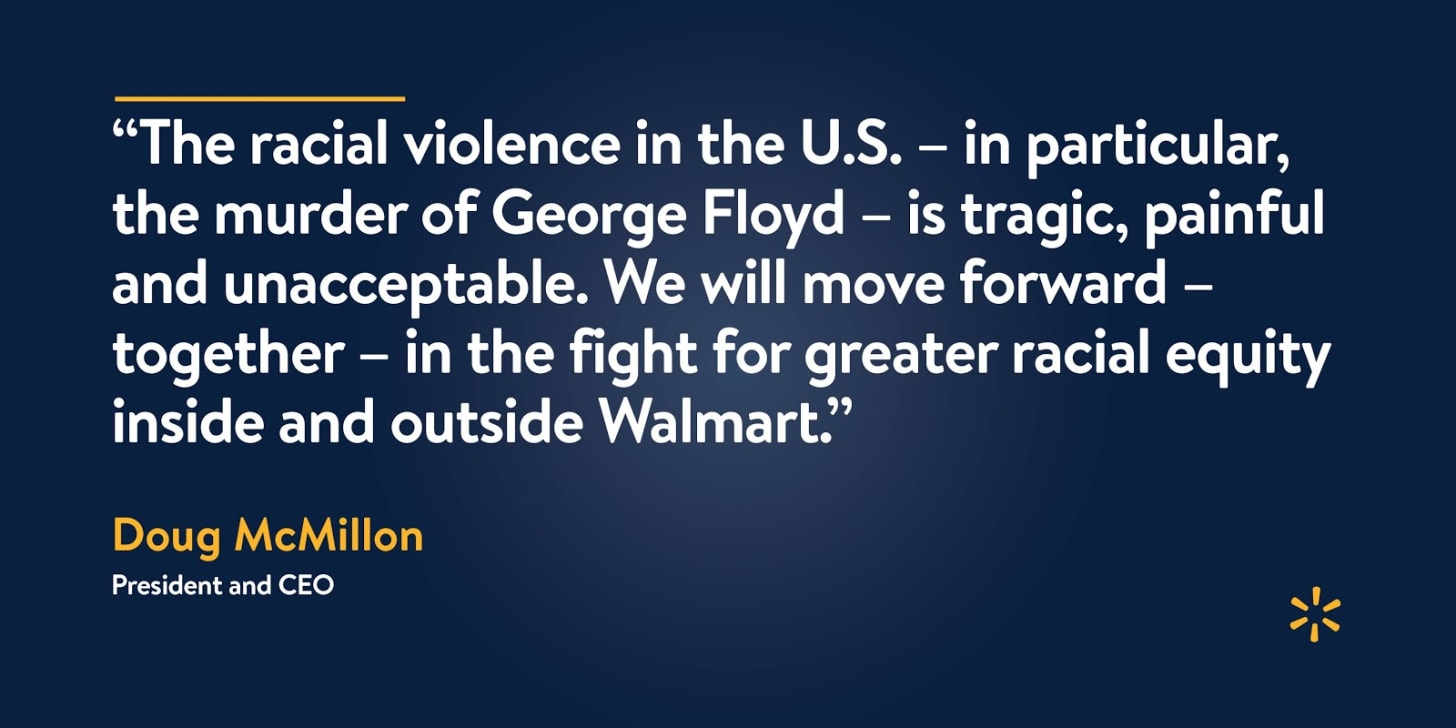 In a national TV interview, McMillon said that the business community has an obligation to combat racial inequality and create "lasting change." He acknowledged that Walmart is involved in systems that "collectively, cause inequities." And McMillon says he's committed to advocating policy changes, and reforming his own company, to tackle racism.

Walmart pays Schlapp $200,000 per year to represent the company on Capitol Hill. Schlapp has worked for Walmart as a lobbyist since 2015.

Popular Information contacted Walmart and asked whether, in light of its commitment to racial equality, it would continue to pay Schlapp as a lobbyist. Walmart did not respond.

We know that Verizon, Abbott Labs, Comcast, and Walmart pay Matt Schlapp because federal lobbyists are required to publicly disclose their clients quarterly. But Schlapp offers numerous services — including communications strategy and coalition building — that do not require public disclosure. If you are aware of other Cove Strategies clients, you can contact me confidentially at jlegum@protonmail.com.

For your security, we need to re-authenticate you.